After understanding the basic principle of WebGL and how to use WebGL rendering, the following few chapters will share with you to find out how this process applied to the Cocos Creator 3.x.

Before we use WebGL to draw out a rectangle, this chapter looks at how to draw the same rectangle Cocos Creator 3.x.

In order to facilitate the user’s use and customization, Cocos Creator 3.x encapsulates the internal functions in multiple layers, and users can assemble them according to their needs. Therefore, we only need to assemble the relevant parts. According to the rectangle drawing process, the content can be divided into the following parts:

Here use the most basic drawing component, Graphics, to draw.

Then, run the preview, and you can see that a pure white rectangle is drawn. 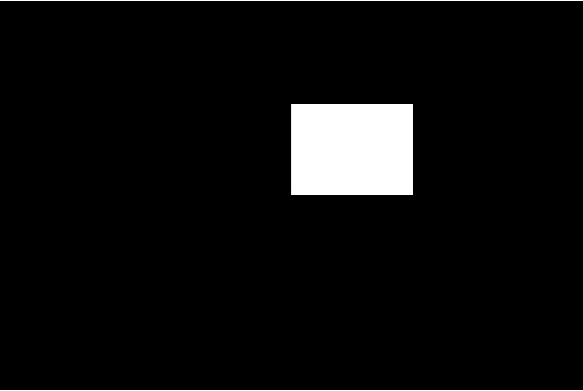 In this process, it has gone through the following stages:

Next, let’s talk about several parts that developers need to care about. All the parts of gl.xxx are processed directly at the bottom layer, so we don’t need to execute it manually unless we need to use customization for the entire process.

In Creator, vertex coordinates originate in model space and eventually need to be converted to screen space. This process requires the following steps:

Therefore, according to the data type, it needs to be converted into the clipping coordinates provided. The graphics provide the model coordinates. Developers who like to explore this further can check the activeMode, _uploadData, and graphics-assembler sections in the graphics.ts in the Cocos Creator engine. Now we can deal with creating the vertex data cache, collecting the drawing data, and binding.

After having the vertex data, the corresponding Shader text needs to be written. In 3.x, it corresponds to the Cocos Effect. Cocos Effect is a single-source embedded domain-specific language based on YAML and GLSL. The YAML part declares the flow control list, and the GLSL part declares the actual coloring fragments. These two parts complement each other and form a complete rendering process. The engine will execute the corresponding rendering program according to this description. Cocos Effect cannot be used alone. It needs to be used with materials.

Note: if you use VSCode to edit the custom Effect. It is recommended to search and install the Cocos Effect plug-in on VSCode to get code highlighting tips.

We can create a .effect file by right-clicking on the Explorer panel of the editor and selecting Effect.

YAML is a serialization language, and it can also be understood as a language that focuses on writing configuration files. Cocos Creator 3.x fully supports the YAML 1.2 standard parser. YAML is fully compatible with JSON syntax, so JSON can also be regarded as a subset of YAML.

YAML is a key-value combination separated by: and spaces.

The above part only lists the common writing methods in the development of the Cocos Effect. For more writing methods, please refer to the YAML official website.

If you want to draw the target rectangle at the beginning of the article, the content can be as follows:

Note: Cocos Creator uses GLSL es300 format to write Shader fragments. Therefore, all subsequent input and output use the “in” and “out” keywords instead of the old version of “attribute” and “varing.” Of course, if you want to continue to use it, it is still compatible.

When the Graphics component is drawing, it also uses a tailor-made Shader, which can be traced in Graphics.ts. It uses the built-in builtin-graphics. You can in the Explorer Panel → internal-> effects found under. Its content is as follows:

Comparing the previous and the next, the part we need almost overlaps with the content needed to draw the rectangle above. There is just one more layer of conversion from model coordinates to clipping coordinates.

Finally, there is still the last part of the content, which is about the camera. When we create the Canvas node, we can see that a Camera node is created by default. The Camera component on the Camera node holds the three properties: ClearFlags, ClearColor, and Rect, and WebGL controls gl.viewport and gl.clear, respectively. In gl.clearColor:

So far, we have roughly understood how to obtain the vertex data of a basic drawing component, Graphics, and its Shader content. In the next chapter, let’s analyze the 2D rendering component Sprite that adds texture mapping based on the basic drawing Shader and make some changes to it.

All objects in the scene must be within the visible area of the camera before they can be finally rendered. The visual conditions of the camera are divided into two parts:

In the end, all the content is processed by the rendering pipeline into a “flattened” 2D pixel. At this time, it does not mean that such 2D pixels are finally presented. The last stage is the viewport. Assuming that the component of the camera Rect is changed to 0.5 at this time, you can see the comparison of the rendered content before and after:

It can be clearly seen that due to the adjustment of the viewport, only the left half of the screen can present content, so only half of the content illuminated by the camera origin is presented.

unity – Professional way to make Isometric 3D Tilemaps for an ARPG in Unity3D?

I’m was working on a top-down ARPG and now I’d like to switch to 3D Isometric. I know that I can place prefabs on Unity’s