In 2022, the state intends to continue its robust spending on the areas most impacted by the COVID-19 pandemic: health and social assistance. 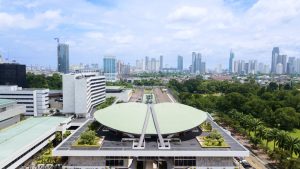 An aerial Image of the Indonesia Parliament complex in South Jakarta, Indonesia.

At the end of September, the Indonesian legislature passed the 2022 state budget, which comes in at around $190 billion. At the time of this writing, a completely finalized and up to date version was not yet available on the Ministry of Finance’s web portal so I’ll be using some figures from the draft budget, which contains only slight differences from the one accepted by the legislature. Like many budgets being passed these days, Indonesia’s is underpinned by an expectation that things will return to a state of semi-normalcy soon, and this is reflected in many of the underlying assumptions.

The biggest of these is that GDP growth will recover to around 5 percent in 2022, which will boost tax revenue to IDR 1,500 trillion (approximately $106 billion) and help close the deficit. In order to cover the extraordinary fiscal stimulus undertaken during the pandemic, Indonesia has been running larger-than-usual deficits in the last two years: 6.14 percent of GDP in 2020 and an estimated 5.82 percent in 2021. By next year, they want to bring this down to 4.85 percent. Yet even with optimistic revenue projections, the government is estimating it will need IDR 868 trillion ($61.5 billion) to finance the 2022 deficit, more than double what was required in 2019.

With low interest rates, a strengthening rupiah, and a narrowing current account deficit, now is as good a time as any to run short-term fiscal deficits in order to consolidate a post-pandemic economic recovery. And this appears to be the conclusion reached by Indonesia’s financial authorities. While their long-term goal is to get the deficit back down to 3 percent of GDP, the 2022 budget calls for slightly more overall spending than 2021. In other words, they are not throttling back on public expenditures and if they have to borrow more to do so, I think that’s something they can live with.

When accounting for these various other transfer mechanisms, the Ministry of Finance estimates that spending on healthcare and social assistance accounts for 25 percent of the total 2022 budget. This is lower than last year’s peak of 30 percent, but higher than the pre-pandemic level of 18 percent. Defense spending, meanwhile, remains at its historical level of around 5 percent of the budget. When looking at spending levels relative to the entire budget, including transfers and subsidies, it’s clear that in 2022 the state intends to continue spending above its historical baseline on the areas most impacted by the pandemic: health and social assistance. As it starts to scale back in anticipation of things normalizing, it will be interesting to see how much fiscal support these areas continue to get in future budgets.

The 2022 budget suggests the government is not taking its foot off the gas just yet, although it is hoping that the amount of deficit-financed fiscal stimulus it needs to keep shoveling into the economy will start to decrease. It remains to be seen whether the economy will actually grow at 5 percent and generate the tax revenue they have projected, but policymakers have shown they are willing to take on debt in order to close the gap. And while that could pose some problems down the line if the Federal Reserve raises interest rates (which looks like it may happen sooner rather than later), it indicates to me this is a budget that was designed with domestic priorities in mind, rather than an eye toward what global capital markets or central banks in other countries might do.

Let’s discover the work made by the London based studio BlueBolt on the second season of the Sky series, Cobra: WANT TO KNOW MORE?BlueBolt: Dedicated