When art meets magic: Forging the fantasy realm of Lost in Random


Redmalm: Zoink [now part of Thunderful Development] has always been an art- and innovation-driven studio, starting new projects with a strong visual and conceptual hook – fueled by our passion for exploration. When I first joined Zoink in 2016, we had just signed our first EA Originals project, Fe, which we worked on alongside Flipping Death. These games feature completely different styles, atmospheres, and tones, [but share] a longing for exploration in game design and for telling great stories in gorgeous, handcrafted-looking worlds.

After these two games, we went on to make Ghost Giant, a VR experience that really tested our ability to deliver a great-looking game – [in] a fairly realistic cardboard, dollhouse world – without losing frame rate.

Our next adventure, Lost in Random, brought with it a larger budget, as well as loosened technical restrictions. This, in turn, opened [up] a variety of artistic paths we could take, which became somewhat overwhelming, so we began by setting some sticks in the sand:

After the cute and colorful Ghost Giant, we wanted to make a dark and epic fairytale, [with] the setting, style, and gameplay revolving around giant tabletop games, including dice, cards, and playing pieces. We wanted to combine the mystery of Fe with the funny and smart dialogue writing of Flipping Death [by Ryan North], plus the deeply emotional storytelling of Ghost Giant.

Rather than create a hyperrealistic game, we [decided] to use this new freedom to recreate a realistic claymation world – something that I think Klaus Lyngeled (our CEO and creative head) had been wanting to do for a long time but hadn’t been able to until now. As to how we went about making this vision a beautiful reality [that] runs smoothly on PC and all other platforms, our Environment Artist, Leo Brynielsson, is here to enlighten us. 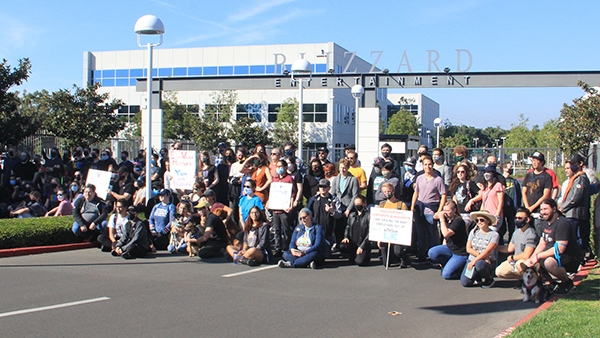 A repeated greeting at today’s Activision Blizzard walkout–the second one in less than six months–was the phrase “well here we are again.”  Employees based near