The travails of the planned metro lines in Hanoi and Ho Chi Minh City offer useful perspective on the role of Chinese development financing. 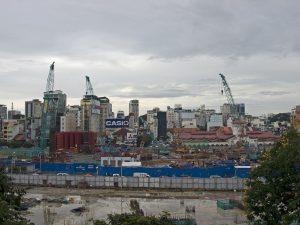 Construction of the Ben Thanh Market Station of the Ho Chi Minh City Metro, as seen on August 4, 2017.

Ho Chi Minh City, Vietnam’s most populous and busiest metropolis, has ambitious plans for alleviating traffic congestion through massive investment in public transit. According to reports in VN Express, the plan is to spend up to $25 billion on eight metro lines with 220 kilometers of track. So far, after more than a decade of planning and construction, they are nearing completion of the city’s first metro line, which if it doesn’t encounter any more delays, could be in service by 2023 or 2024.

Upon completion, Line No.1 will be almost 20 kilometers long, financed mainly through concessional lending from Japanese development banks. Construction began in 2012 and the project has sailed past numerous proposed completion dates as costs steadily escalated. It was initially budgeted at around $749 million, but in 2019 the Ministry of Planning approved an increase to nearly $2 billion. More recently, construction has been delayed by the pandemic which made it difficult for overseas experts to enter the country, and there have been issues with the quality of the construction. A $293 million plan to develop the Ben Thanh station that will anchor the system into a retail center have been complicated due to a lack of investor interest.

A second 11-kilometer metro line is in the planning and land acquisition phase, with the estimated cost jumping from $1.1 billion to around $2 billion. It has been slowed by disputes over land acquisition, and in 2020 the government cancelled an initial $390 million in financing from the Asian Development Bank (ADB) so that it could turn around and request a larger $1 billion loan to cover the increased costs. The ADB loan is being paired with $313 million in financing from German state-owned lender KfW.

Up north in Hanoi, the capital city’s first two metro lines have been experiencing similar delays. Line 2A, a 13.1-kilometer track financed through concessional lending via the Export Import Bank of China, saw costs jump from an initial $552 million to $868 million. Line 3, which will run for 12.5 kilometers, has a total price tag of around $1.38 billion and is being financed by the ADB and several European lenders. After many years of delays both of these projects are making their way toward completion.

Vietnam’s urban metro projects are part of a larger national transportation vision, which includes plans to spend billions in the coming years on roads, railways, airports and seaports to support its booming manufacturing-led growth. But the delays and cost overruns encountered in the Ho Chi Minh City and Hanoi metro projects underscore a wider point about building large public transit systems in dense urban environments, which is that it’s really difficult. Projects are frequently delivered over-budget and missed deadlines are common. Financing is complicated (particularly in a country like Vietnam where the government places strict borrowing limits on itself), and land acquisition is almost always a sticking point.

These projects also help us to understand broader trends related to infrastructure investment in Southeast Asia, and I think add useful perspective on the role of Chinese development financing in the region. First of all, many countries in Southeast Asia are doing what Vietnam did: sourcing financing for major infrastructure projects from a variety of sources, including Chinese, Japanese, European, and multilateral development banks. (The U.S., on the other hand, is conspicuously absent). Because BRI gets so much attention in the media, it can sometimes occlude the role of these other financial institutions as well as the agency recipient countries have in inducing major players to compete with one another.

The second point is simply that these complex, large, and expensive public works projects are slow and the costs frequently sail past initial budget estimates. This is true whether the projects are being financed by China, Japan, or any other lender. I think this undercuts somewhat the logic of debt trap diplomacy, because BRI-backed projects hardly have a monopoly on delays and cost overruns. The fact that it’s taken ten years or more for Vietnam to slowly achieve just a fraction of its overall urban rail goals, despite throwing billions of dollars sourced from a variety of international lenders at it, draws a neat line under that reality.

It’s that time again. Black Friday. November 26, to be exact. And the many enticing deals you’ve been looking forward to at this time of